Let’s start with my confession. I have been a user researcher working with games for over ten years. I have run hundreds of studies, and overseen thousands of hours of playtests (over 25,000 player hours at last count!). And yet, I know very little about stats.

There are two quantitative research things I know how to do. Today, I will explain both.

The first thing is how to compare two sets of numbers. I was taught this by Cyril and Mirweis at PlayStation, and I am grateful to them both for teaching me the only stats I know – how to compare two sets of numbers. This is useful when comparing things such as ‘how many times did the player fail’ or ‘how long did it take people to complete this level’

This method is appropriate for when the data is numerical rather than categorical (or ordinal). Here’s a short explanation of what that means.

When you have some numerical data, it’s quite common to want to compare it. This allows you to learn “is there a difference between these two things”, and then inspire conversations such as “do we want players to fail more times on this level than on the next one?”.

To do this, you want to find the average, and then work out some confidence intervals to anticipate whether the difference between them is real or whether it was potentially caused by not measuring enough people.

So, after counting how many times people died on level 3, you can take an average – which looks like this.

We can see that on average, players died around 2.5 times on level 3.
We can then do the same thing for the next level.

Looking at the average for Level 4 shows us that people died on average more often on Level 4 than they did on Level 3.

But we don’t know if this is because Level 4 causes more deaths, or just random chance that it occurred in this study.

To identify that bit, we calculate confidence intervals. Which looks like this… 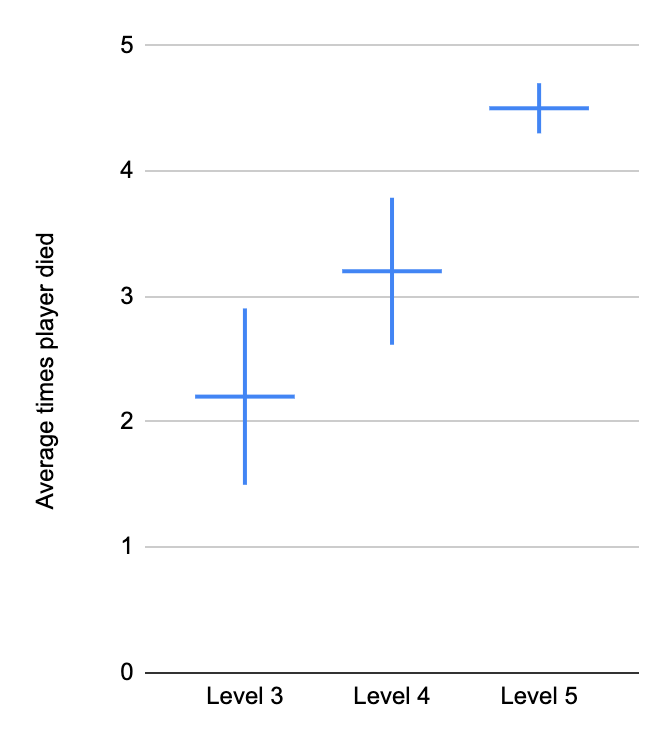 And we can see that the confidence intervals (the uppey-downy bits) overlap. The top of Level 3 overlaps with the bottom of Level 4.

This hopefully means that Level 5 harder – although you should watch people play to understand actually why the difference in deaths occurred.

If the confidence intervals don’t overlap, we can’t tell if there is a difference. This is the case for Level 3 + 4. This either means that the number of times people die are the same, or that we haven’t seen enough players to draw an appropriate conclusion.

(There are probably errors in the terminology above, but as I said, I know little about stats – I just know how to compare two sets of numbers).

I use this all of the time – to count and compare deaths, completion time, etc. I made a template that you can duplicate to see the formulas required, and to have a go at doing it yourself.

Beyond this one technique, I’ve found two other tools very helpful.

Adjusted wald calculators like this allow you to state your completion rate (e.g. 3 out of 10 people encountered this issue), and from that anticipate how many people in the real world would encounter the same issue (between 10% and 60% apparently).

And the book ‘Quantifying the User Experience’ which has lots of nice decision maps like these, which tells me what tools I should (and shouldn’t) be using … and includes a crash course in stats to explain how to do them!

The second thing I’ve learned is a collection of things not to do. By recognising some stats errors, it helps me know when I should seek out someone better with stats than me to help out.

The job is not just qualitative research

Instead always lead with ‘what does the team want to know’, and then ‘what is the most appropriate way of discovering that’. If that method isn’t one you are comfortable with, use it as an opportunity to learn how to do a new thing, ask for help from the community, or bring in some help from someone who is comfortable with it. Our job is to “help the team make evidence-based decisions”, regardless of the methods we are most comfortable with.

What quantitative research skills should I be ready for in the job interview?

If you can answer the following questions, I would say you would be a stand-out candidate…

You will notice that these questions are often not about ‘how do I do the stats’, but much more interested in ‘when is quantitative research appropriate, how should it be applied, how should I explain things to my colleagues, and what are the caveats for this kind of work’. Which I think is where the real challenge lies!

Every month, get sent the latest articles on how to start a career in games user research, and hand-picked job opportunities.

Steve Bromley is an expert user researcher, who works with studios of all sizes to run playtests, and integrate user research into the game development process. 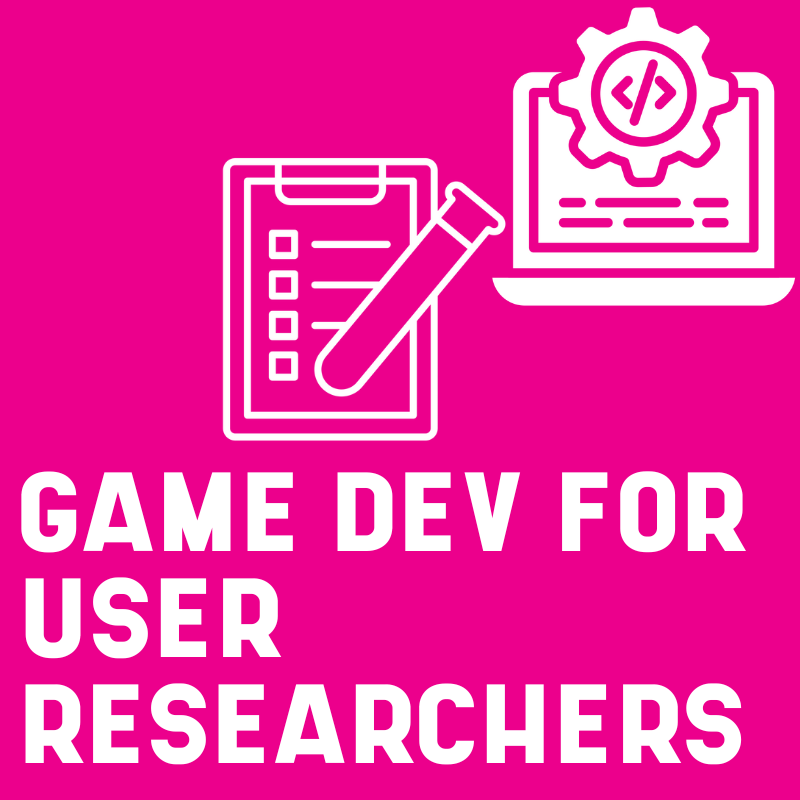 Understand game development, and how user researchers interact with their industry peers, and be more likely to pass the interview. 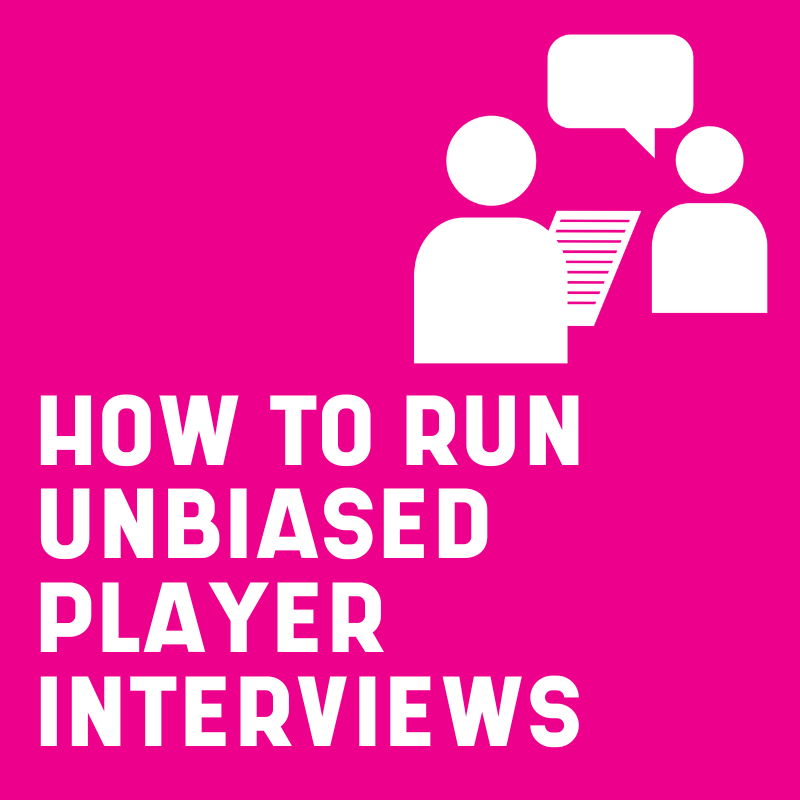 How to run unbiased player interviews

Every stage of preparing, running and analysing your playtest interviews. Plus tips on how to reveal player’s honest thoughts, and apply that to game design decisions. 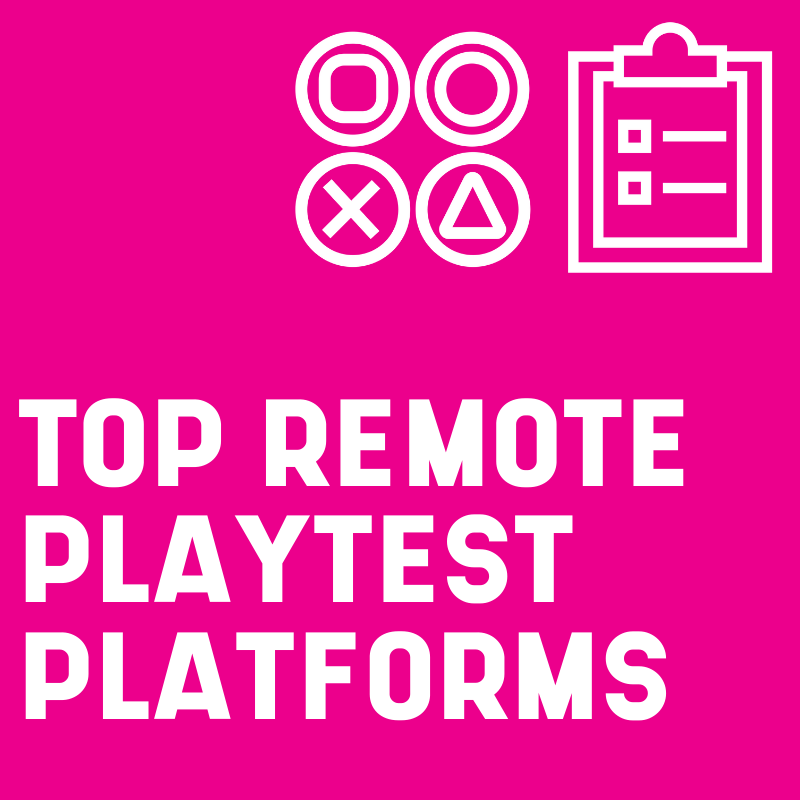 Pick the right online playtest platform for your needs